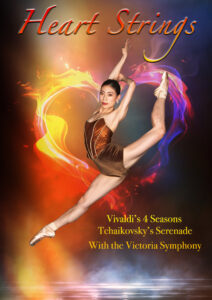 Ballet Victoria and the Victoria Symphony, featuring violinist Christi Meyers, join forces to bring to life an all new program featuring two timeless and iconic works: Vivaldi’s 4 Seasons and Tchaikovsky’s Serenade. Destrooper brings to life a contemporary, colourful, and vibrant interpretation of the seasons with a West Coast flair, a bit of romance, and much playfulness. For Serenade, simply expect to delight your senses with a surprisingly dynamic and yet seamless interpretation of the score.

More about The Four Seasons

The Four Seasons was written by Antonio Vivaldi, an accomplished Italian Baroque composer. Vivaldi was also a virtuoso violinist, teacher, and Roman Catholic priest. Many of his compositions were written for the all-female musical ensemble of the Ospedale della Pietà, which was a convent, orphanage, and music school in Venice. He composed many instrumental concertos, sacred choral works, and over fifty operas. The Four Seasons is regarded as Vivaldi’s most famous work.

The Four Seasons is a collection of concertos that each represent a season of the year. Though it is debated which came first, The Four Seasons was published alongside four sonnets that describe images and scenes brought to life by Vivaldi’s music; singing birds, thunder and lightning storms, harvest celebrations, and frozen winter landscapes, to name a few. This was one of the first instances of ‘program music’ that had a narrative aspect. Each of the four concertos is divided into three movements (slow, fast, slow), just as each sonnet has three sections.

Serenade for Strings was composed by Pyotr Ilyich Tchaikovsky, the same great composer of the Romantic period that produced The Nutcracker, Swan Lake, and The Sleeping Beauty, among many other pieces of music celebrated worldwide.

Tchaikovsky returned home in 1880 after having lived in Paris. Mourning the death of his father, only his creative activity saved him from his sadness and desolation. In that year, he created four important works: the second Concerto for Piano and Orchestra, Italian Capriccio, 1812 Overture, and Serenade for String Orchestra in C Major. Initially intended to be a string quintet – two violins, viola, cello, and double bass – Tchaikovsky later decided to expand the number of musicians for Serenade. He noted on the second page of the score, “The larger the number of players in the string orchestra, the more this shall be in accordance with the author’s wishes.”

It is clear from the number of times Tchaikovsky included Serenade in his tours in Europe that it was one of his favourite works. He once wrote to his patron, “I composed the serenade . . . from inner conviction. It is a heartfelt piece and so, I dare to think, it is not lacking in real qualities.”