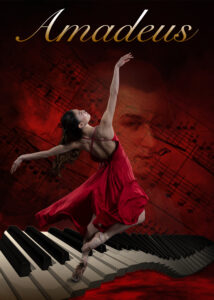 A passionate and poignant ballet about Mozart, his inspirations, his demons, and his music. Unique in musical history, Mozart wrote over 800 works, spanning virtually every genre of his time. Destrooper’s music selections include rock and hip-hop interpretation of Amadeus’ works, reflecting the innovation and timelessness of Mozart’s work and more. Expect a spectacle!

Described by his father as “The miracle which God let be born in Salzburg,” Wolfgang Amadeus Mozart was born in 1756. He was a gentle, sensitive young boy, whose musical talent was evident at an early age. By three, he could pick out chords on the harpsichord, and by age six he was performing in public. His father, who was his teacher, took Mozart and his sister on tours across Europe to perform for the aristocracy.

While working on the Magic Flute, Mozart received a commission to compose a requiem (a solemn chant, such as a dirge or hymn, for the dead). He accepted the commission, but had to travel to conduct in Prague, and the requiem’s deadline quickly approached. Having experienced spells of illness previously, he took to his bed on November 20, 1971 with another fever. Though his illness seemed to improve, he passed away on December 5, having only completed the opening of the requiem.