Broadway on Pointe and other works 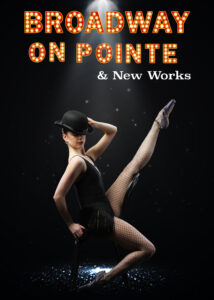 Singing, dancing, acting! Dramatic, bold, and beautiful; two stars collide on the roller coaster of fame in this one-act ballet to Broadway’s most iconic tunes. The program will open with Le Banc, a series of vignettes set around a park bench choreographed to Bach’s cello suites, and one new creation. Simply, an exhilarating performance.

More about the Music

Broadway on Pointe features catchy, upbeat songs from musicals such as Chicago, Kiss Me Kate, and Sweet Charity, and films such as the 1937 film Shall We Dance.

Le Banc is danced to Bach’s famous cello suites, which have a mysterious origin. Not known until the early 20th century, this work is now one of the most frequently performed pieces written for cello. At the time it was written, the cello was considered more of an accompanying instrument, compared to the virtuosic violin, for example, which makes this work all the more groundbreaking. The original manuscript is lost, but Bach’s wife had copied a large amount of his works and luckily one of her copies survived. There are no tempo markings, therefore the pace at which the cello suites are performed is at the cellist’s discretion.